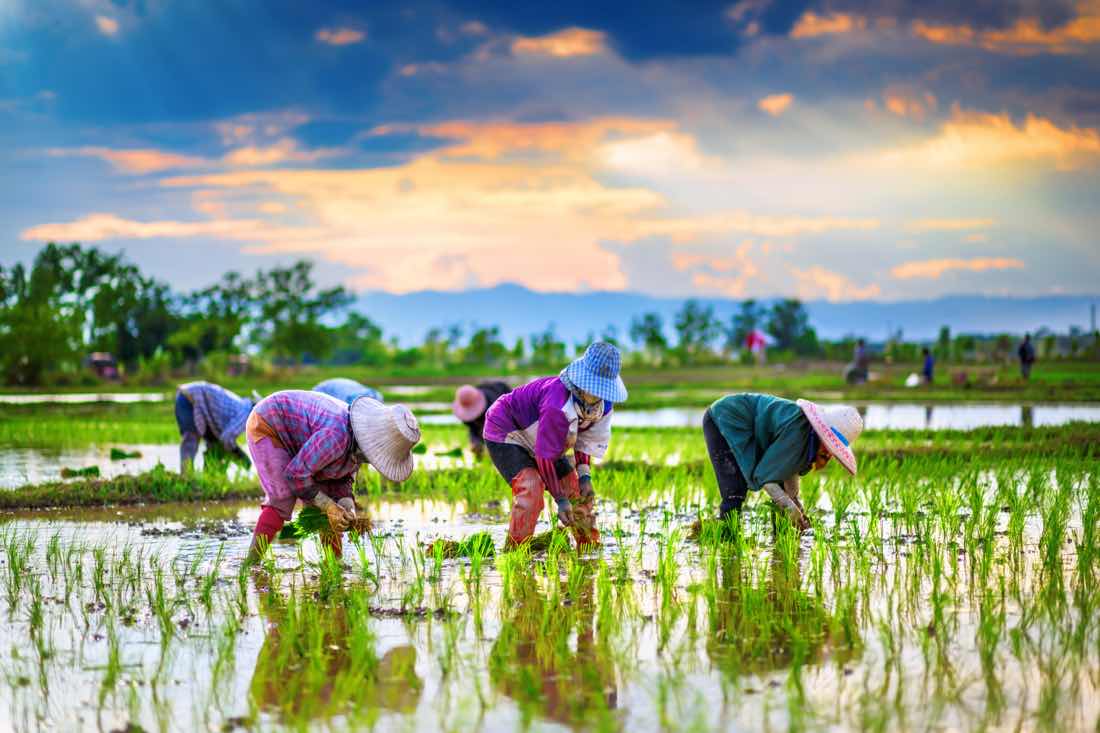 When we think of tax-free and low-tax countries, the Middle East or Caribbean beauty spots like the Cayman Islands, the Bahamas, or perhaps European states like Switzerland and Liechtenstein come to mind first!

We’d like to demonstrate though, that perhaps it’s time to think outside the box and turn our atlas towards Asia. Firstly, we’ll explain a little why many areas of this vast continent can act as a tax haven for the humble Australian expat.

Many parts of Asia have only recently undergone their very own industrial revolution. As industry marches on, many of these countries have decided to forge their own paths, with new ways of doing things that don’t have the weight of the past holding them back. As anybody with a rudimentary sense of economics understands, low taxes (or indeed no taxes) is a great way to kickstart productivity.

Why is Asia becoming increasingly attractive to Australian expats?

Asia is a continent on the rise. All pieces are falling into place to set the area up for an unparalleled rate of development over the next half-century.

Generally speaking, Asian countries are more than happy to accept Aussie expats with money to spend, and will even go out of their way to make life straightforward as far as taxes and bureaucracy are concerned.

From a geopolitical perspective, most Asian countries are far from the strongest players. As an Australian expat, you can use this to improve your wealth and for your own personal gain.

A lot of states within Asia are trying to gain an economic advantage by allowing wealthy expats to enjoy a wealthy, fulfilling lifestyle in exchange for the free flow of foreign capital into the country.

The benefits are clear as day:

In various Asian countries, many are aware that by imposing excessive taxes, expats are likely to simply take their wealth elsewhere. The end result is a win-win for both parties: Aussie expats get to live in an incredibly desirable country with lower taxes beyond those for goods and services rendered in the country, while the local government receives a healthy stimulus to its economy.

It’s something of a symbiotic relationship – and you should definitely consider taking advantage of it.

How easy is it for Aussie expats to move to Asia?

It can be difficult to gain permanent residency or citizenship in many Asian countries – unless you’ve got capital.

Throughout history, areas where industry has blossomed have been entrepreneurial in spirit, and modern-day Asia is no different. Most countries are happy to welcome Aussie expats, provided they are bringing something to help the local economy to thrive. As such, certain Asian countries can be incredibly tax-friendly to newcomers.

But even without a lot of capital or savings, it’s often very possible to move to many Asian countries, by acquiring longer term visas, or shorter-term visas, because often the visa renewal process in many Asian countries is straightforward, with visas easy to renew, without any regard to how many times or how often your visa has been renewed.

In this article, we’re going to take a look at the best countries in Asia for Australian expats. As an Australian expat, you may be able to use these countries for your financial benefit and significantly lower the amount of Australian tax that you pay. Without further ado, let’s take a look at where you should consider citizenship in Asia, particularly if you want to stick it to the taxman back home!

Moving further south and even further east we find the Philippines, a vast archipelago of over 7,000 islands, located close to Vietnam. While the Philippines is an incredibly beautiful place, it’s also perfect for the expat who wants to pay less in Australian taxes.

This is because the Philippines has a territorial tax system specifically for foreign corporations, foreign nationals and non-resident citizens whereby only income sourced in the Philippines is taxable. The Philippines essentially doesn’t have any capital gains tax on profits gained from foreign investments, and there’s no wealth tax either. As such, there are distinct advantages to acquiring permanent residency in the Philippines: money can be transferred quickly and easily from Australia into the Philippines with absolutely zero tax consequences.

While Singapore might seem exotic, it still retains English as an official language and shares some cultural similarities with Australia. Like the Philippines, Singapore has also implemented a territorial tax system that only taxes the individual on money earned in the country.

Singapore has no foreign exchange controls, and neither dividends nor capital gains are taxed. While there are small property taxes and some taxes on goods and services, these are relatively small when you take the low cost of living into account.

For Aussie expats living and working in Singapore, who might seek to establish a business in the country, you’ll be pleased to know that tax on corporate income sourced within Singapore is set at a flat rate of 17%.

In addition to this, the establishment of a Singapore company in the form of a private, limited liability company could be useful for holding assets, trading securities, conducting personal transactions and accumulating funds and assets.

As there’s an enormous amount to consider before establishing any structure advice from suitably qualified advisors is strongly recommended.

Similarly, if you have a Singaporean company and you are considering relocating back to Australia, it’s also highly recommended to seek advice well in advance of your return. In some cases, it may be best to wind up the company prior to regaining your Australian tax residency status so so as to inadvertently expose your accumulated profits/funds to Australian taxation after you return.

Hong Kong, ceded to Great Britain under the Treaty of Nanking in 1843 was a colony and dependent state of the British Empire until 1997 at which time the city was handed back to the Chinese government.

Similar to Singapore, Hong Kong also retains English as an official language and and has also implemented a territorial tax system that taxes its residents only on income that is derived from Hong Kong. Personal income tax rates range between 2% to a maximum of 17%.

For Aussie expats living and working in Hong Kong, and who seek to establish a business in the country, you’ll be pleased to learn that tax on corporate income sourced within Hong Kong is taxed at 8.25% on the first HKD $2 million and 16.5% on profits exceeding HKD$2 million.

The establishment of a Hong Kong company in the form of a private, limited liability company could be useful for holding assets, trading securities, conducting personal transactions and accumulating funds and assets.

Again, advice is strongly recommended prior to establishing any structure as there is a lot to consider before doing so.

Similarly, if you have a Hong Kong company and you are considering relocating back to Australia, it’s even more strongly recommended that you seek advice well in advance, about your company and about your forthcoming return to Australia.

In some cases, it may be best to wind up the company prior to regaining your Australian tax residency status so so as to inadvertently expose your accumulated profits/funds to Australian taxation after you return.

Many accountants consider Malaysia, and the city of Kuala Lumpur in particular, as the holy grail as far as taxes are concerned. It’s well-connected in terms of transport, the food is great, the scenery is stunning and it’s really rather easy to get permission to reside there.

Why is Malaysia a great choice for Aussie expats?

If you’re tired of feeling hard done by every time you file your Australian tax return, you’ll no doubt feel envious when you see what Malaysia has to offer. As an Australian expat with residency in Kuala Lumpur you can expect to enjoy:

Making Malaysia work for you

A reasonable Australian tax reduction strategy would be for an expat to establish a holding company in Malaysia that earns income by managing the investments and assets of companies operating outside of Malaysian territory. For example, a Malaysian holding company with a nominee director could perform management services for investments in stocks, real estate, deposits, loans and more.

While Malaysian holding companies are required to report their operations each year (and pay any relevant taxes on earnings within Malaysia) to the Malaysian government, a suitably structured arrangement will mean that the company is exempt from capital gains tax on profits, which helps to reduce the tax burden within the home country of the corporations managed by the holding company.

For the Australian expat who wants to strike a balance between the creature comforts of home and the exotic intrigue of the Middle East, the UAE is a great choice. English is widely spoken and the country is practically built on foreign influence. It’s also one of the best places to live for Aussie expats with a high net worth.

In addition to this, the United Arab Emirates offers an incredibly high standard of living without the need to pay any income tax whatsoever. That’s right – the UAE has an income tax rate of 0%. Dubai is often the choice for the discerning Australian expat looking to settle in the UAE: it’s full of glamour, beautiful beaches and a bustling social scene.

The only drawback of the UAE is that its structure is not particularly designed for solo entrepreneurs. Officials will often raise eyebrows or become slightly suspicious when solo entrepreneurs attempt to jump through the bureaucratic hoops to make this country their home – and you can almost certainly expect to be asked for information on your employer and salary. When you reveal that you own your own company and your salary is whatever you want it to be, things can get complicated – but not complicated enough to make moving to the United Arab Emirates a bad idea.

Thinking about moving to Asia?

Does this all sound a bit complex? Perhaps what you need is an accountant to explain how it all works. Here at Expat Taxes, we’re Australian Chartered Accountants who advise Australian clients in over 100 countries around the globe, with a strong focus on Asia – so why not allow us to show you the way?

We believe in offering a thoroughly modern service – and this means utilising modern technology and practices. We’re not interested in charging hourly rates: instead, we like to get to know what our clients would like to achieve and agree to an upfront fee, regardless of how complex the matter is or how long it takes us to get the job done.

We pride ourselves on being approachable, which is why we’re the preferred choice for so many Aussie expats around the world.

If you’d like more information on how you could reduce your Australian taxes, get in touch with us today. It’s what we do best, and we’re here to help you find expat tax success!