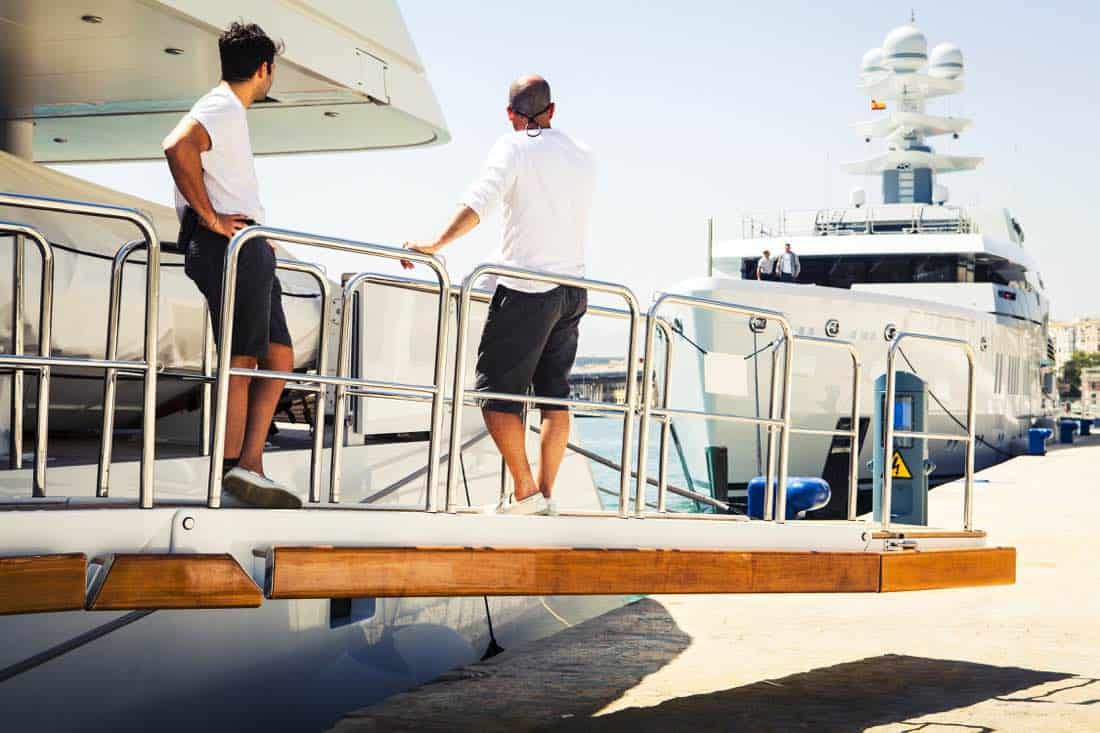 Leaving Australia to join the crew of a super-yacht or cruise ship somewhere overseas may sound exciting, but it’s actually increasingly popular.

More and more Aussie expats are saying ‘no’ to that traditional gig in an English pub, and ‘yes’ to cruising the Mediterranean on a boat worth millions, working as a Captain, a Chef, a steward, deckhand or some other role.

Aside from the adventure and excitement of such a role, more often than not expat Aussies are attracted by the chance of earning tax-free dollars overseas?

But hang on! Is that really right?

That’s a question that we’re asked regularly from super-yacht crew working all over the globe- is my income tax free?

Just because your new role might be tax-free overseas, does this mean that you don’t have to pay tax anywhere, including Australia?

Sadly, for many Australian’s working on super-yachts and cruise liners all over the world, this is simply not the case. Many super-yacht workers remain Australian tax residents and as such are required to pay tax on their worldwide income, notwithstanding that their super-yacht income may be tax-free overseas.

The unfortunate thing about most super-yachting crew is that it is very, very rare that they are non-residents.  Unfortunately, Australia’s tough residency tests generally treat crew as residents, with 100% of their worldwide income caught for Australian tax purposes at Australia’s high tax rates.

The problem stems from Australia’s Domicile Test of residency.

Under the ‘Domicile Test’ if your domicile is Australia (broadly, if you were born in Australia, if you have an Australian passport or if Australia is broadly considered to be your permanent home), then you WILL remain a tax resident of Australia unless you have a ‘permanent place of abode outside of Australia’.

Unfortunately crew quarters on cruise ships and super-yachts are generally regarded by the ATO as being temporary and/or transitory in nature and therefore are not considered to be your permanent home.

Thus, most crew-members fail to meet the criteria of having a ‘permanent place of abode outside Australia’ and thus remain tax residents of Australia by default. Sadly, this typically applies no matter how long you’ve stayed on-board and how long you’ve worked overseas in that role.

So unless you’ve established a permanent home in another country, more than likely you’ll be treated as an Australian resident subject to tax in Australia.  Take a look at some recent private binding rulings issued to various Australian super-yacht and cruise ship crew (below). These rulings lay out some of the issues that crew face as far as the ATO are concerned:

As you can see from these rulings, Australia’s complex residency rules cause significant problems for Australian super-yacht and cruise ship workers. Lured overseas by the potential to earn tax free salaries, most Australia crew-members have been disappointed to learn that their “tax-free” wages and salaries are dragged back into the Australian tax system and taxed at high Australian tax rates unexpectedly.

Unfortunately these problems are exacerbated by Australia’s incredibly complex residency rules and the lack of information available to super-yacht and cruise ship workers. This article is my small attempt to remedy that but if you’re still unsure about how these rules apply to you or what you can do about it, get in touch with us as we’ll be able to help.

At Expat Tax Services we’re experienced in acting with super-yacht crew and cruise-ship workers all over the world. we’ll be able to help you understand how these rules will apply to you and even where your super-yacht and cruise ship earnings are caught by the Australian tax system, all may not be lost as there may be some strategies that you can implement to solve the problem going forward.

If you want to learn more, book a tax consultation with our Expat Tax Services team today.

Editors Note – Updated 22nd April 2020: As you have learned, most Australian yachties generally remain as tax residents of Australia notwithstanding the length of time that they may have worked overseas.

Regardless of your circumstances, it is absolutely critical that you seek advice about your residency status because, If you cannot meet the criteria required to be a non-resident, as most won’t, then you will need to prepare and lodge your Australian tax returns as a tax resident and as a result, pay tax in Australia on your on your worldwide income (including your overseas salary and wages). I cannot stress this enough.

then you are at great risk of receiving significant fines and penalties from the ATO for non-lodgement or for incorrectly preparing your tax returns, especially since the ATO already know about your overseas bank account, it’s balance and salary you received into that account – yes that’s right, in the vast majority of cases, the ATO already knows how much money you earned as a yachtie for the last few years!!

To illustrate the seriousness of this issue for Australian yacht crew, we highly, highly recommend that you also read our latest article on this topic titled The ATO already knows about your overseas bank accounts!.

We also highly recommend that you book an ‘Expat Already Overseas’ appointment with us as soon as possible (before the ATO begins to chase you) so that we can run through all the issues and so that we can formulate an appropriate tax strategy (suitable to your individual circumstances) to comply with your obligations in such a way that minimises your risks, and minimises the tax outcomes. If you wish to do book that appointment please do so by clicking here: ‘Expat Already Overseas’.